How does TMS work? 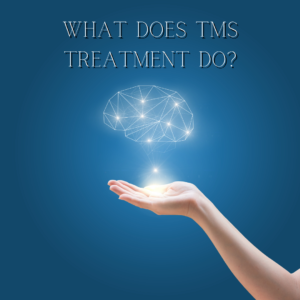 TMS stands for transcranial magnetic stimulation. It’s an FDA-approved treatment for depression. It’s also being used to successfully treat issues such as OCD, PTSD, substance use disorders, and even developmental disorders such as autism spectrum disorder.

How does TMS work?

Our brains help in managing our thoughts by creating pathways that communicate with each other via electrical and chemical messengers. Each thought or feeling coincides with particular pathways: roads that these signals travel along. The more our brain practices certain pathways, the better it gets at doing whatever it is that we practice. It’s kind of like muscle memory but for the neurons. Now how does this translate into depression?

In PET scans of a typical non-depressed brain, researchers were able to see on the scan areas of the brain light up in day-to-day activities. The lit-up areas on the PET scan, signal areas where oxygen and glucose (the fuel for our neurons) are being used. They also performed scans on individuals with depression. In individuals who were not depressed, certain areas of the brain (especially the frontal lobes and the central areas where the limbic system lies) had higher amounts of activity. The limbic system is the emotional center of our brain. In someone with depression, you could say the limbic system is way out of practice.

Now in TMS, a magnetic coil is placed over the head and generates an electromagnetic field that provides enough energy for the neurons to reach what we call, an action potential. This is a fancy way of saying the neurons turn on. Then like dominoes, those neurons and messages cause other neurons to fire, which causes more neurons to fire, and so forth. This roadway of neurons reaches deep areas of the brain such as the limbic system. This is where those pathways are located in our brain that are associated with being happier, less anxious, more relaxed, and less content.

Where TMS shines is that while a single positive thought can activate a particular pathway once, a single TMS session will activate that pathway thousands of times. A typical course of TMS is around 36 sessions. During a full course of treatment, these therapeutic pathways are activated hundreds of thousands of times. Now imagine practicing a golf swing, or tennis serve, or a song on the piano hundreds of thousands of times. You’d get pretty good at it. This is a lot like what the TMS process is. The more therapeutic maneuvers (TMS or psychotherapy as well) are practiced, the more of an expert your brain becomes and developing it’s emotional resilience. And, the less of an expert it gets at feeling depressed.

TMS is a non-invasive, simple outpatient procedure. There is no need for anesthesia, no need for hospital stays. During the procedure, the patient can listen to music, watch movies, even talk. Patient can drive themselves to and from the treatment sessions. They can go right back to their typical day.

What Are The Side Effects of TMS Treatments?

This is another excellent aspect of TMS. Because it is such a focal treatment, TMS does not have any of the traditional side effects that can be associated with medications. They include weight gain, sexual dysfunction, memory changes, nausea, sedation, or blurred vision. The most common side effect of TMS is a mild headache during initial sessions, which disappear over the course of a few days. Most patients report no side effects at all. TMS is a fantastic option for anyone who has not had sufficient benefit from antidepressants and augmentation.

If you are looking to try an alternative treatment option to deal with your depression or anxiety why not try TMS? Contact our office today to set up an initial consultation to see if TMS is right for you or if you have any questions about the procedure. You can also see our TMS Therapy page for more information. Take control of your life today!  414-250-8236